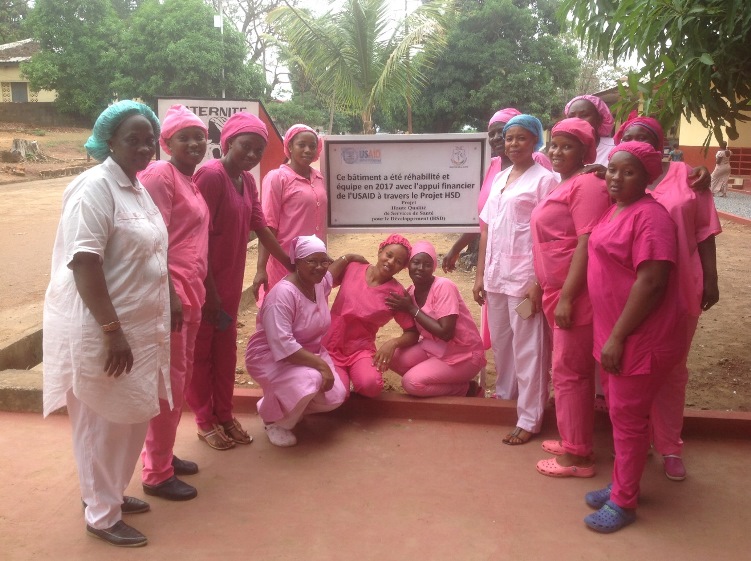 May 2017—KINDIA, Guinea—Marie Sylla has been a midwife for more than 15 years now at the maternity center of the regional hospital in Kindia, in the northeast of Conakry. As the head midwife, she has always been on the front line of efforts to protect the lives of children and women whose mortality rates are some of the highest in the world.

Sylla uses downtime between deliveries to teach expecting mothers in the waiting area about proper nutrition and the importance of prenatal care. This has helped build a good rapport between her and the pregnant women seeking treatment.

According to Sylla, the maternity center now treats about 50 pregnant women each month, after overcoming patients’ earlier distrust of the facility.

“Before, it was not easy for us. Patients complained that prenatal consultation was free, but we still collect money from them. There was a profound distrust between them and us. But we had to ask them for money to buy drugs and other basic medical supplies for a smooth delivery because we lacked adequate medical supplies. But today, all that is history. We are friends again,” said Sylla.

Upgrades to the facility provided by USAID have resulted in markedly improved services and more patients.

“Expecting mothers are coming to hospital in good number now because those who come from remote villages and deliver safely inform the most reluctant ones of the positive changes here,” added Sylla.

In 2015, USAID, through its Health Service Delivery project, intervened to rehabilitate the regional hospital and provide it with critical equipment.

“In the past, if you had two women giving birth at the same time, you had to use one set of tools for both women, one after the other,” says Sylla. “That was very difficult and unsafe. Now we have enough sets of tools that can be sterilized after use. Women used to give birth on the floor because there were no beds and we used lamps and flashlights during the delivery because of the frequent power cuts and our standby generator was often without fuel.”

“Visitors used to invade us here before, but they now have a waiting area where it is mandatory for them to stay, giving the patients more privacy,” added Sylla.

Working with the Government of Guinea to help reduce child and maternal mortality is one of the priority areas for USAID’s programs in the post-Ebola recovery period in Guinea. The Health Service Delivery and Health Communication Capacity Collaborative projects have trained more than 700 health workers and have rehabilitated and equipped four hospitals and 14 health facilities with modern medical equipment to provide high-impact maternal and child health services.