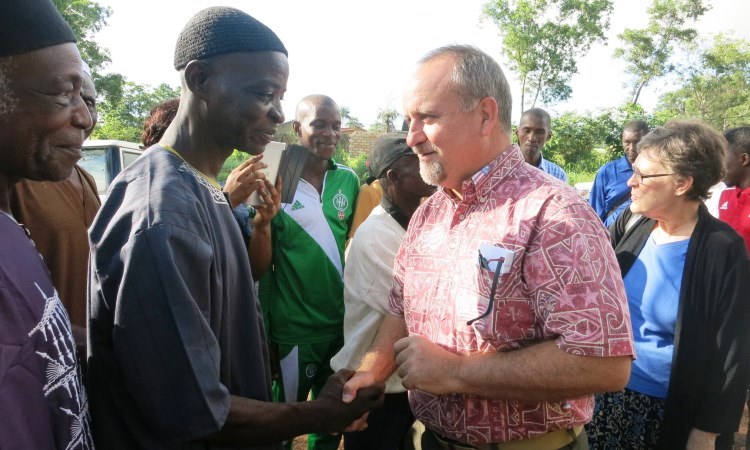 On July 7, Chargé d’Affaires Hugues Ogier visited Lower Guinea’s Federation of Fruits Producers (Federation des planteurs de la filière fruit de la Basse Guinée).  During the visit he toured two pineapple farms and inquired about the challenges that producers face.   For Alseny “Niger” Soumah, who owns a 3 hectare pineapple farm in the district of Toureya in the sous-prefecture of Friguiagbe, 130 kilometers from Conakry, as well as Ibrahima Sory Soumah, owner of a 5 hectare pineapple farm in the same village, the main challenge is water supply. Moussa Camara, Chairman of the Federation, expressed his gratitude to USAID’s “Guinea Agriculture Services” project for supporting Guinea’s agriculture sector.  Widely referred to as the “Orchard of Africa,” Kindia has long been known for abundant production of fruits and vegetables.

As part of Chargé Ogier’s trip to Kindia, he visited the Institut de Recherche Agronomique de Guinée (IRAG) where he received a warm welcome from the faculty.

Chargé Ogier and his colleagues concluded their visit with the USAID-funded young AVENIR entrepreneurs (Agents en Vulgarisation, Entrepreneuriat et Innovation Rurale) who are in training at the Higher Institute of Agriculture.  After their training, AVENIR graduates work as extension agents who provide advisory and other services to producers, input suppliers, processors, and others working throughout the agriculture value chain.