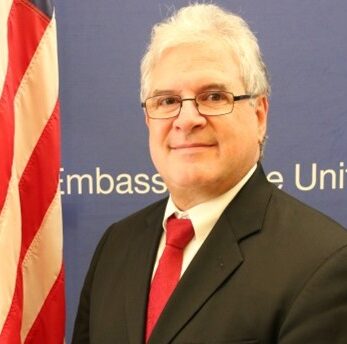 Steven Koutsis has served as Chargé d’Affaires a.i. in Conakry, Guinea since September 2020. A career member of the Senior Foreign Service, class of Minister Counselor, Mr. Koutsis most recently served as Chief of Mission in Khartoum, Sudan from November 2016 to September 2019. Prior to that, Mr. Koutsis was Director of the Office of the Special Envoy for Sudan and South Sudan. He served as Deputy Chief of Mission in Ouagadougou, Burkina Faso, from 2013 to 2015. He was Deputy Director and acting Director of the Office of Central African Affairs from 2011 to 2013. Mr. Koutsis was Team Leader of the Provincial Reconstruction Team in Diyala Province, Iraq in 2010-2011. He was Political and Economic Counselor in Monrovia, Liberia from 2007 to 2010, and served as Deputy Chief of Mission in Nouakchott, Mauritania, from 2005-2007, serving as Charge d’Affaires, a.i. for a total of eight months during that period.

Mr. Koutsis was Consular Section Chief in Damascus, Syria from 2002 top 2005, and during that assignment he served eight months in Iraq with the Coalition Provisional Authority to re-establish the Foreign Ministry. Previous assignments include Abidjan, Cote d’Ivoire, Washington, D.C., Marseille, France, and Port-au-Prince, Haiti. Mr. Koutsis received the Department of the Army’s Superior Civilian Service Award for his service in Iraq, as well as several Department of State awards. Mr. Koutsis, a native of Massachusetts, attended Boston University where he received a Bachelor of Arts Degree. In 2002 he completed language training at the State Department’s Arabic Language Field School in Tunis, Tunisia. He is married and has one daughter. He speaks fluent French.