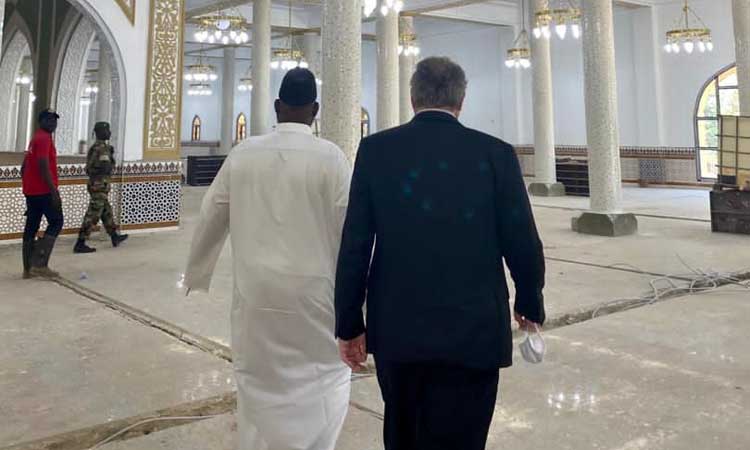 The Chargé d’Affaires, a.i. Steven Koutsis called on Elhadj Mamadou Saliou Camara, the Grand Imam of Faycal Mosque, on November 5, where he reiterated the United States’ support of religious freedom, peaceful assembly, and inclusive dialogue. Imam Camara explained how he is encouraging non-violent engagement and interfaith dialogue. He also underscored the work he and his team have done to promote peace among people of all backgrounds, and affirmed his desire to continue working with the United States to foster peace.

Imam Camara commented on the strong people-to-people relations between the two countries, noting how much he enjoyed participating in the IVLP’s “Religious Diversity and Tolerance in the U.S.” program. The Chargé d’Affaires a.i. thanked the Grand Imam for the warm reception, and told him he has a deep sense of respect for Guineans, and the work the mosque has done to underscore tolerance, national unity, and continued inter-ethnic peace. He praised Imam Camara for his continued dialogue with key election stakeholders to avoid post electoral conflict.

After the warm welcome, Imam Camara and his team invited the Chargé d’Affaires, a.i. to visit the Camayenne Mausoleum, where several Guinean historical figures, including former President Sekou Touré and Samory Touré, are interred. The delegation also toured the Grand Mosque (Fayçal Mosque), presently under renovation.