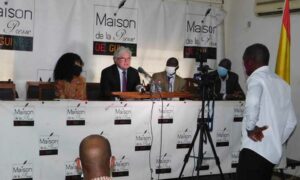 Today, the United States Embassy partnered with Maison de la Presse de Guinée to host a press conference with Chargé d’Affaires a.i. Steven Koutsis. This engagement served as an opportunity for the Chargé to directly discuss with journalists about the upcoming presidential elections. The U.S. Embassy remains committed to a transparent electoral process.

Chargé d’Affaires a.i. Steven Koutsis stated that “The United States is committed to supporting credible, transparent and peaceful elections in Guinea. We believe that all parties must participate peacefully in the democratic process. The right to peaceful assembly and freedom of expression and association are at the heart of a functioning democracy.”